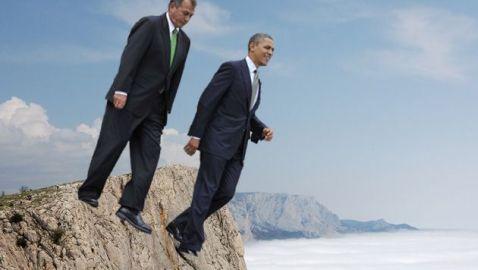 House Speaker John Boehner (R-Ohio), has received a new offer from the White House in an effort to avoid the fiscal cliff. The offer was presented on Monday and it matches the amount of spending cuts with revenue-raisers. It also calls for two stimulus measures and hopes to avoid a debt limit debate in the next two years. The Huffington Post received the details of the offer from an anonymous source.

With the new proposal, President Obama has set his sights on raising $1.2 trillion in revenue instead of his initial demands of $1.6 trillion and then $1.4 trillion. Obama, with this deal, will no longer insist that taxes jump for families that have an income higher than $250,000. In the new proposal, Obama is also asking for permanent extensions for the Bush tax cuts for incomes under $400,000.


The new proposal asks for limits on the tax benefit of itemized deductions to be set at 28 percent for taxpayers. The estate tax will return to the 2009 parameters. If this happens, estates worth more than $3.5 million will be taxed at a rate of 45 percent.

The offer proposes $800 billion in savings, of which $290 billion comes in interest savings. The proposal will also have $100 billion in defense cuts and $130 billion in savings that would appear from the inflation index for Social Security benefits. Obama, with the new proposal, still will not raise the Medicare eligibility age from 65 to 67. In the offer there is health care savings of $400 billion.

Other points to note from the proposal include Obama wanting to extend unemployment benefits, which are set to end at the end of 2012 and money for infrastructure spending. It is not known how much money for the infrastructure at this time, but the president’s first offer asked for $50 billion.


This new offer has been described as an official within the administration as being one that the White House views as a true midway point between the two sides’ stances. The official also noted that it is not the president’s ‘final offer.’

Michael Steel, the spokesman for Boehner, emailed a statement to the Huffington Post. The statement reads as follows:


“Any movement away from the unrealistic offers the President has made previously is a step in the right direction, but a proposal that includes $1.3 trillion in revenue for only $930 billion in spending cuts cannot be considered balanced. We hope to continue discussions with the President so we can reach an agreement that is truly balanced and begins to solve our spending problem.”