Got a tip?
Home » Breaking News » North Korea Threatens to Nuke the USA 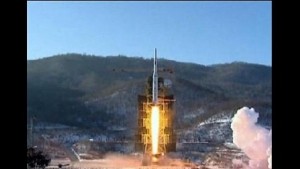 North Korea’s statement Thursday reveal they are as belligerent as ever to their “sworn enemy” the United States of America, and will continue their nuclear tests and missile construction in order to attack us. Their rocket launch in December breached U.N. rules, and even their greatest supporter, China, signed a sanction for them to cease their nuclear testing.

“We are not disguising the fact that the various satellites and long-range rockets that we will fire and the high-level nuclear tests we will carry out are targeted at the United States,” North Korea’s National Defense Commission said.

Typically, when a nation or religion is losing its integrity, it targets foreign enemies. North Korea is feared to be doing its third nuclear test, after one in 2006 and 2009. In 2006 it created a detonation yielding one kiloton of TNT, and 2009’s test delivered 2. Bombs like Hiroshima delivered 13-18 kilotons, but it is believed that North Korea is enriching uranium supplements that will give them a higher destructive capacity. They are estimated to have enough plutonium for a dozen warheads. The Institute for Science and International Security estimates that North Korea could have enough weapon grade uranium for 21-32 nuclear weapons by 2016.


China signed sanctions with Japan, South Korea, and the United States that North Korea should cease its volatile game plan. Since China bolsters North Korea’s otherwise impoverished economy, these are not mere words, but carry significant weight. North Korea responded to China in vague terms, saying that “big countries, which are obliged to take the lead in building a fair world order, are abandoning without hesitation even elementary principle, under the influence of the U.S.’s arbitrary and high-handed practice.”

By “fair world order” they might mean global communism. After their missile tests, they have demonstrated their missiles could potentially reach San Francisco — and nuclear holocaust seems to be their dream of reigning in the peace of communism.

U.S. Secretary of Defense Leon Panetta said Thursday that he sees “no outward indications” that North Korea will conduct a nuclear test, but he said we would not be able to predict it. “They have the capacity, frankly, to conduct these test in a way that makes it very difficult to determine whether or not they are doing it,” he said in a Pentagon press conference.


“We are very concerned with North Korea’s continuing provocative behavior,” Panetta continued, but said that the United States is “fully prepared” to deal with them.