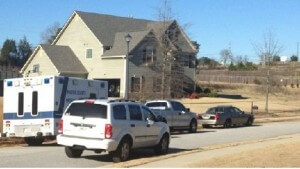 Supporters of the right to bear arms speak of crime rates dropping and the increased security of law-abiding citizens. Stories like this one bear some of that out. A Georgia mother living in a three story home on Henderson Ridge Lane in Loganville heard a ringing to the door bell last Friday as she worked in her upstairs office. Suspecting it was a solicitor, she told her 9-year-old twins not to answer it. When the ringing persisted, she called her husband, who told her to hide in the crawl space with the kids while he called 911. And this she did, after grabbing her gun.

The man at the door than used a crowbar to pry his way in and went about burgling the place, moving from room to room. When he finally got to the crawl space in the attic, as Walton County Sherriff Joe Chapman says it, “The perpetrator opens the door. Of course, at that time he’s staring at her, her two children and a .38 revolver.”

She proceeded to shoot six times: one bullet missed, the others hit him in the face and neck.


“She’s standing over him, and she realizes she’s fired all six rounds. And the guy’s telling her to quit shooting.”

At that point, the woman and her kids ran to the neighbors. Meanwhile, the intruder managed to get back into his car, only to crash into a nearby wooded area.

“When you got five bullets in you, it makes you kind of disoriented,” explained Chapman. By the time police arrived he was gasping on the sidewalk begging the police for help.


The burglar is 32-year-old Atlanta resident Paul Slater. He had four exit wounds of the five bullets that hit him and had difficult surgeries ahead of him. He was also charged with burglary.

The woman’s husband, meanwhile, is proud of her. “My wife is a hero. She protected her kids. She did what she was supposed to do as a responsible, prepared gun owner.”