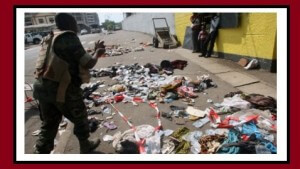 Going downtown to see the fireworks is fun, but you have to expect some nasty traffic on your way back home. Sometimes patiently waiting to get on some major road can take longer than the entire light show. Things were much worse in the Ivory Coast this New Years, however, when, after the fireworks show at Felix Houhouet Boigny Stadium had gone smoothly enough, the crowd for some reason or another panicked as people flooded through the gate to get home.

61 people died in the stampede, many of them children.

“My two children came here yesterday. I told them not to come but they didn’t listen. They came when I was sleeping. What will I do?” asked Assetou Toure in an interview with Reuters.


“I just saw all the bodies, but I cannot find my son, I don’t know what to do,” said another man.

“In the crush, people were walked over and suffocated by the crowd,” Lt. Col. Issa Sako said, according to AFP.

Chris Brown had performed at the stadium just the night before to celebrate the end to 2011’s civil strife. President Alassane Ouattara has called the stampede a national tragedy, and has visited victims at the hospital and is going to schedule a day of morning.