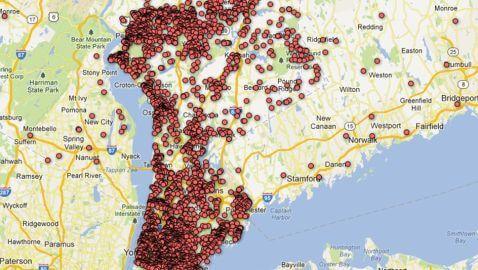 The Journal News has published an interactive map that has the names and addresses of all the handgun permit holders in the counties of Westchester and Rockland in New York. Readers can zoom in on red dots that show where licensed pistol or revolver owners live. The blue dots on the map show those who “have purchased a firearm or updated the information on a permit in the past five years,” according to CNN.

The paper has received a ton of backlash ever since the map was published. The publisher of the paper, Janet Hasson, who is the president of the Journal News Media Group, issued a statement. The statement said the following:


“One of our roles is to report publicly available information on timely issues, even when unpopular. We knew publication of the database (as well as the accompanying article providing context) would be controversial, but we felt sharing information about gun permits in our area was important in the aftermath of the Newtown shootings,” she said.

In a statement, the newspaper said, “We were surprised when we weren’t able to obtain information on what kinds and how many weapons people in our market own.”

In the statement, the paper was told county clerks’ offices that “the public does not have the right to see specific permits an individual has been issued, the types of handguns a person possesses or the number of guns he or she owns. Had we been able to obtain those records, we would have published them.”


The addresses and names of the Rockland and Westchester county permit holders were obtained by the paper through the Freedom of Information Act. The newspaper did make sure to note that the map does not say if the permit holders actually own guns.

Some of the comments left on CNN’s article include the following:


“If you’re a gun owner it’s a matter of public record. If you’re embarrassed by your gun, get rid of it. I have a car and a house — they’re no secret. People contact me all the time trying to sell me stuff. I don’t expect a right to privacy for these things.”

“Every gun manufactured, transferred, and sold should be on the internet, all on one website, including date of purchase, current owner, stored location, and gun license number.”

“Publishing gun owners’ names makes them targets for theft or public ridicule. It is journalistic arrogance to abuse public record privilege, just as it is to air 911 calls for no reason or to publish the home addresses of police or judges without cause. Unwarranted publishing of the names of permitted owners just encourages gun owners to skip the permitting.”