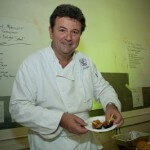 The owner of a popular San Diego restaurant has been hit with a $400,000 fine for employing, illegally, undocumented immigrants.

Michel Malecot, 59, was not thrown in jail; as well, his fines and penalties were below the $650,000 sought by federal prosecutors. Malecot is a naturalized U.S. citizen from France and a major donor to local charities. U.S. District Judge Thomas Whelan, who also ordered five years of probation, said Malecot appeared to hire undocumented immigrants at The French Gourmet out of compassion rather than to take advantage of them.

Restaurant owners are leery, as criminal prosecutions of them are unusual. Federal prosecutors face high burdens of proof to show that employers knowingly hired undocumented immigrants.


Rebecca Kanter, an assistant U.S. attorney, urged a higher fine against Malecot to serve as a deterrent for other employers from illegal hiring. The restaurant employed 91 undocumented immigrants over several years.

“This is the type of cost that can be absorbed,” she said of the nearly $400,000 fine. Clearly Kanter doesnâ€™t work in the restaurant industry, or apparently, live in the real world.


The prosecutor challenged the judge’s assertion that Malecot acted out of compassion, saying he had a financial motive. Kanter said it would have been illogical for him to hire undocumented immigrants at the same wages and conditions of those legally allowed to work.

Eugene Iredale, Malecot’s attorney, said the restaurant owner found out his employees were working illegally after he hired them and “couldn’t pull the trigger to fire someone.”

“His work has truly been dedicated to helping others,” Iredale said.

Malecot, who pleaded guilty in October to a misdemeanor that carried a maximum penalty of six months in custody, apologized to the judge and said he took steps to avoid illegal hiring. The French Gourmet signed up for a program to verify the immigration status of new hires on a federal database.

Malecot’s family, friends and employees packed the courtroom. A boyhood admirer of John Wayne, Malecot came to the United States as a young adult and found success in the restaurant business, opening his bistro in San Diego’s Pacific Beach neighborhood in 1979.

According to information at The French Gourmetâ€™s website, they are leading professionals in San Diego for Wedding receptions, Holiday catering, Social catering, and Corporate catering. The French Gourmet is also well known for its casual and quaint San Diego French restaurant and bakery in La Jolla. All products are prepared fresh daily on the premises.