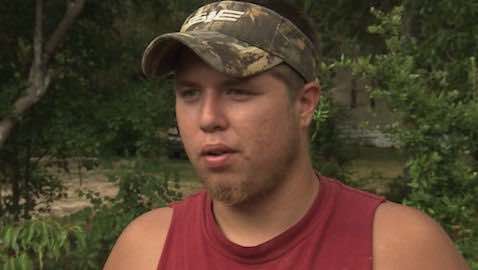 Summary: A friend of the Charleston church shooter, Joey Meek, has been arrested for allegedly lying to federal agents and concealing information.

CNN reports that Joey Meek, a friend of Dylann Roof, the young man who is accused of murdering nine individuals in a Charleston, South Carolina church, is now facing charges of his own.


Meek has been indicted on charges of making false statements to the FBI and concealing details related to the shootings. He is accused of withholding information about RoofŌĆÖs plan to carry out the shootings.

Meek was scheduled to appear at 11:00 a.m. in the U.S. District Court of┬ĀColumbia, South Carolina, on September 18. According to the Washington Post, he has entered a plea of not guilty.

The families of the murdered victims expressed forgiveness after the shootings.


Meek said that he was friends with Roof when they were kids.┬ĀThough they lost touch over the years, they had reconnected in recent┬Āmonths. Meek admitted that Roof scared him at times.

Meek commented that Roof wanted to have a ŌĆ£race war,ŌĆØ and that Roof even asked Meek to film him burning an American flag.


A few days after the shootings Meek spoke with reporters. He recalled how Roof, while drunk one night, said he was going ŌĆ£to do something crazy.ŌĆØ

Meek actually hid RoofŌĆÖs firearm that night but replaced it the next day. He explained, ŌĆ£I didnŌĆÖt take him serious.ŌĆØ

Details quickly emerged after the shooting.

However, the indictment accuses Meek of knowing more than he has led on. Prosecutors allege┬ĀMeek┬Ātold an FBI agent he “did not know specifics of Dylann RoofŌĆÖs plan to shoot individuals on a Wednesday, during Bible Study, at an AME Church in Charleston, South Carolina.ŌĆØ

They argue, ŌĆ£MeekŌĆÖs statements and representations denying such specifics were false, fictitious and fraudulent when made.ŌĆØ

Meek told CNN that he heard a description of the shooter the morning after the massacre. He says he called the FBI to provide details of what Roof had been wearing, as well as information about the license tag on his vehicle.

CBS News adds that MeekŌĆÖs girlfriend, Lindsey Fry, has stated┬ĀMeek called her on the day of his arrest. He told her it looked like federal agents were closing in. ŌĆ£They want to talk to me, but I think IŌĆÖm going to jail,ŌĆØ he told her.

On June 17, Roof shot and killed nine individuals as they participated in a Bible study. One of┬Āthe nine victims was Reverend Clementa Pinckney, a state senator.

Police apprehended Roof in North Carolina the day after the attack and ultimately┬Āreturned him to South Carolina. Roof has admitted he was the shooter. If he is convicted, the 21-year-old may face the death penalty.

The Supreme Court recently ruled that the death penalty is constitutional.

After the shootings, Meek said, ŌĆ£I’m sorry this all happened to everybody. And it could have been prevented if people would have taken him serious. But Dylann wasn’t a serious person, and no one took him serious.”