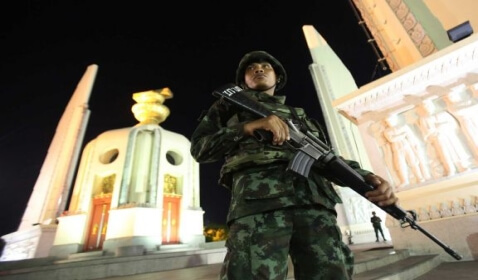 CNN, BBC and other cable news channels were taken off the air, but continued to report from Bangkok. The army had ordered the suspension of all television broadcasting and replaced programming with patriotic music to fill air time between announcements, according to the Huffington Post.

Thailand, according to the Huffington Post, is an economic hub for Southeast Asia whose turquoise waters and idyllic beaches are also a world tourist destination. It has been gripped by off-and-on political turmoil since 2006, when billionaire former Prime Minister Thaksin Shinawatra was toppled by a military coup after being accused of corruption, abuse of power and disrespect for Thailand’s king.


The powerful army chief, General Prayuth Chan-ocha, announced the military takeover in a statement broadcast on national television. An army spokesman announced later on that it had dissolved the caretaker government and canceled the constitution, but the Senate would remain in place. The Huffington Post has reported that Prayuth would assume the duties of the prime minister until a new one was in place.

“We ask the public not to panic and carry on their lives normally,” Prayuth said, according to the Huffington Post and adding that the military would “provide protection” for foreigners in Thailand.

Col. Steve Warren, the Pentagon spokesman, said that the Pentagon is reviewing its military relationship with Thailand in light of the coup.