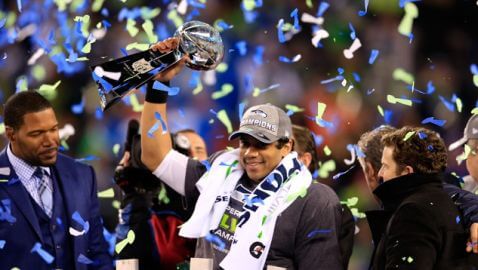 In what could have gone down as the greatest Super Bowl in history, the 48th edition of the NFL title game was over 12 seconds after it started.

The Seattle Seahawks routed the Denver Broncos by a score of 43-8 at MetLife Stadium in New Jersey.


All the talk heading into the game was how it would decide the legacy of one of the league’s greatest quarterbacks of all-time, Peyton Manning. All it did was cement into fans’ minds how he struggles to win the big games.

Manning is just 11-12 in the playoffs and 1-2 in the Super Bowl, according to The Associated Press. He was overwhelmed by Seattle’s extraordinary defense from the start of the game. Denver is now 2-5 in franchise history in Super Bowls. The first snap from scrimmage saw the ball fly over Manning’s head and into their own endzone for a safety.

Seattle never trailed in this game after grabbing the quick 2-0 lead. The Seahawks led for 59:48 of the game, making their safety the quickest score in Super Bowl history. It beat the previous record by two seconds.


The Seahawks defense recorded two interceptions, returning one for a touchdown, which earned linebacker Malcolm Smith the game’s MVP award. Smith returned an interception 69 yards for a score. All told, the Seahawks forced four turnovers in the game.

After their performance on Sunday night, the Seattle defense can be compared to the 1985 Chicago Bears and the 2000 Baltimore Ravens, both of whom won Super Bowl titles with dominating defensive performances.


Seattle head coach Pete Carroll becomes the third head coach to win a national championship at the collegiate level and a Super Bowl in the NFL. This is his third head coaching stint in the NFL. He was previously fired by the New York Jets and the New England Patriots. Carroll won two national titles with the USC Trojans.

This was Carroll’s fourth season at the helm of the Seahawks and it was eight years after Seattle lost its first Super Bowl appearance to the Pittsburgh Steelers.

Seattle made it a 36-0 game before Denver could even put points on the board. The Broncos only score of the game was a 14-yard touchdown pass from Manning to Demaryius Thomas. The Broncos then converted on the two-point conversion when Manning hit Wes Welker.

As of Monday morning, the victory parade for the Seahawks was tentatively scheduled for Wednesday in Seattle as they bring home the Lombardi Trophy for the first time in franchise history.