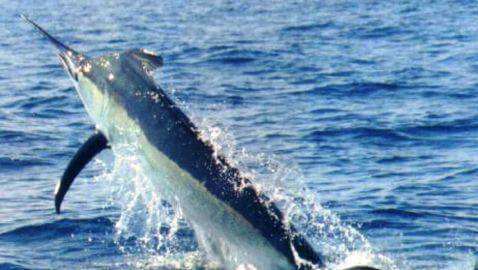 One of the largest fish catches in history has reached the North Carolina Supreme Court, according to The Associated Press. The fishing charter boat called Citation left dock on the Outer Banks to compete in the June 2010 Big Rock Blue Marlin Tournament.

Just four hours after leaving dock, crew members of the boat fought to reel in an 883-pound blue marlin. The catch was recorded in coastal Morehead City.


“When we finally saw it we couldn’t believe it,” the Citation’s captain, Eric Holmes of Buxton, said at the time. “To catch a fish this big … it’s something. It really is. We got lucky and it’s good to be lucky.”

The owners of the boat wound up in a legal battle for the prize money of $910,000 that continued on Tuesday in the North Carolina Supreme Court. The crew of the Citation was disqualified by tournament officials because the boat’s first mate, Peter Wann, did not have a fishing license when the fish was reeled in off the coast of North Carolina.

Wann is from Alexandria, Virginia and he needed a license in North Carolina. Wann’s fishing license was bought as the Citation was still two hours out to sea and headed towards land. The license costs $30.


In 2010, one of Citation’s owners said Wann thought the boat had a blanket license to its name, which would have covered the whole crew. The lawyers for the boat also claim that the fish was caught outside of North Carolina’s territorial waters, which are just three miles off the shore. Therefore, the license Wann bought came in federal waters.

The rules of the tournament state that a fishing license is required for everyone onboard a participating vessel, according to the lawyers for the tournament. The rule was mentioned at a pre-tournament meeting that Holmes and Wann missed.


“The guiding principle in all of the various tournaments that has existed from time immemorial is ‘the rules are the rules,'” attorney Claud Wheatly III wrote in one Supreme Court filing. Wheatly is the lawyer representing the owners of the 2010 runners-up boat, Carnivore. The owners of Carnivore are set to divide $999,453 of the winner’s share and some of the money from third-place.

The Supreme Court is going to have to make a decision about the friendship between Wheatly and Superior Court Judge John Nobles Jr. The two are also former business partners. Wheatly said that the lawyers for the Citation were not able to provide evidence that Nobles showed bias or prejudice.

A divided ruling was issued because of the lawyer-judge relationship by a three-judge panel of lower state appeals court, which is why the Supreme Court is now hearing the case.