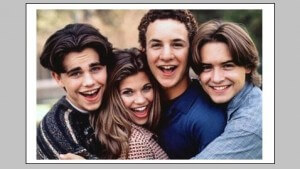 There’s some good news for all the “Boy Meets World” fans out there: the series is rebooting in a new incarnation, “Girl Meets World.” Though the new series will focus on Riley, the daughter of Cory and Topanga, characters whose young love themed the original 1990s series, both Ben Savage and Danielle Fishel will return as well.

Danielle Fishel, who played Topanga, has long felt proud of the series, and vows that the new series will have the same “honest, innocence, and intelligence” the original series was known for. She lauds her fans for so strongly praising the original series:

“First of all, let me say that you, the fans of ‘Boy Meets World,’ have been awesome,” she wrote on Tumblr. “You, yes even YOU, are the reason the ‘Girl Meets World’ WILL BE MADE.”


She made no promises about what actors will carry over from the original. “It will have familiar faces, familiar themes, and familiar messages. It will also have new faces, new themes, and new messages,” she explained. “For those of you who knew and loved BMW, please allow this show to evolve as well. Stick with us. Give us a chance.”

When will the new series by up and running? It’s not yet certain. A Disney Rep explained that “the pilot is still in the very early stages of development with creator and executive producer Michael Jacobs, Emmy Award-winning creator/producer behind ‘Boy Meets World,’ ‘My Two Dads,’ and ‘Charles in Charge,’ among others.”

The character for the 13-year-old daughter, Riley Matthews, is also yet to be cast.