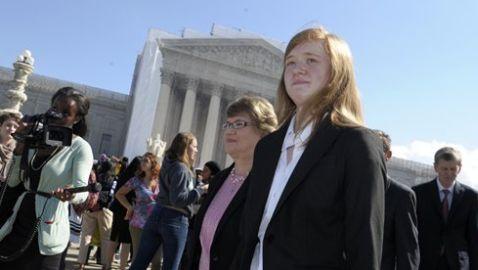 A program at the University of Texas is being challenged by the Supreme Court because it considers race in some of its admissions to the school. The case in the Supreme Court could cause new limits for affirmative action at universities across the country.

The argument began on Wednesday morning and Abigail Fisher was in attendance. Fisher is the white student from Texas who was denied admission to the school.


According to the university, the program fills about one quarter of its incoming classes and uses race as one of multiple factors when deciding admission of students. The school also argues that the program has to use race so it can provide diverse educational experience for students, which is something that the Supreme Court endorsed in the past. The remaining spots in the classes are given to students based on their class rank, with absolutely no discussion of race.

“How do they figure out that particular classes don’t have enough? What, somebody walks in the room and looks them over to see who looks Asian, who looks black, who looks Hispanic? Is that how it’s done?” Justice Antonin Scalia said.

Justice Elena Kagan will not be involved in the case because she worked on it as a member of the Justice Department prior to her joining the Supreme Court. A decision should be rendered by June.