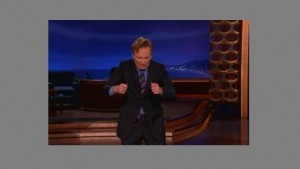 It seems Conan O’Brien was miffed at Elisabeth Hasselbeck’s forwardness when she, unlike the fawning and praising other women on the show The View, didn’t simply lob a softball question at special guest President Obama, but asked something a bit more difficult. Conan wondered how such audacity could come from a reality television show loser.

“Who the hell’s Elisabeth Hasselbeck? … She won a reality show… she didn’t even win! She was, like, fifth!”

Her question to the president had taken this form:


“These tough questions get tougher to ask you because I wholeheartedly do really like you both. But I have some concerns that I think many Americans have right now, especially in light of the recent findings by the Bureau Labor Statistics and US Census so, including the median household income that flat lined and fell across the board this year. [The] income gap which we talk about all the time between the poor and the richest actually grew to the widest it’s been in 40 years, and 23 million Americans are out of work or have just stopped looking. Some would ask is it unfair to assume that Mitt Romney may fail the middle class when statistically speaking, they argue that your administration is failing the middle class. How do you respond to that?”

Despite the doctored clip Conan showed, which makes the president appear to sidestep the question “smoothly” by congratulating Barbara Walters on her birthday, the President did respond to the question intelligently, referencing that we were in the worst recession in decades, and that he is building a foundation for the middle class, and so forth.

What seems to have blown Conan’s mind is that she had the audacity to ask a real question:


“Hey, leader of the free world! Answer this!” he mocked her.

Subservience, however, is not a characteristic of the American people. Our national poet Walt Whitman said that it wasn’t in America’s “executives or legislators, nor in its ambassadors or authors or colleges or churches or parlors, nor even in its newspapers or inventers … but always most in the common people” that we find “the genius of America.” He praised the common people’s “air they have of persons who never knew how it felt to stand in the presence of superiors,” and considered it American poetry in “the President’s taking off his hat to them not they to him.”


Whoever is supposed to be intimidated by the phrase “leader of the free world,” it shouldn’t be the free. Addressing the president with actual concerns rather than adulation is American.