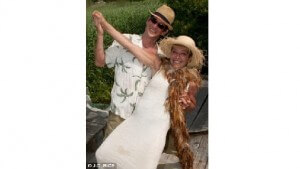 What has America come to when a romantic dance in an empty subway platform becomes recourse for police intervention and violent take down? That is what Caroline Stern, a 55-year-old dentist, and her boyfriend George Hess, a 54-year-old movie prop master, are wondering. After having a fun evening at the Midsummer Night’s Swing, a big-band dance party at Manhattan’s Lincoln Center, the couple was in good spirits, and it seemed only natural that when a musician in the subway started playing steel drums they move to the rhythm. After all, there were only about three people on the platform.

“We were doing the Charleston,” said Stern. But a police men accosted them demanding an explanation for their behavior. “They said, ‘What are you doing?’ and we said, ‘We’re dancing,'” she explained. “And they said ‘You can’t do that on the platform.'”

When the couple could only produce a credit card by way of identification, and when Hess used her phone to record the incident, the officer called for backup. When backup arrived, they tackled Hess to the floor, pinning him and slapping on cuffs. They were subsequently thrown in a cell to wait no less then 23 hours for their freedom, and though the charges of resisting arrest and disorderly conduct for ‘impeding the flow of traffic’ were subsequently dropped, the couple isn’t willing to drop what they consider an appalling misuse of power.


“It was absolutely ridiculous that this happened,” said Stern.

They have since filed a suit against the city of New York for the arrest.

Campari Group is a major player in the global spirits industry, with a portfolio of over 50 premium ...

Associate Position LWDN LWDN seeks a well-qualified attorney to join its Chattanooga office. We a...

Marrero & Wydler is a boutique civil litigation firm located in Coral Gables.  We seek a depend...