Got a tip?
Home » Legal News » The Latest Foxconn Suicide 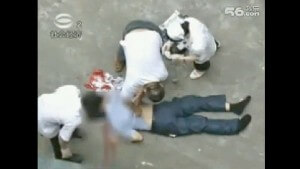 Another Foxconn employee jumped to his death from his company-rented high rise this Thursday. Foxconn, the Chinese company that brings us those endlessly fascinating iPhones, iPads and other gizmos, not to mention 34 hour work days, dozens of worker suicides, and threats of imprisonment for anybody talking about forming a union, seemed to have gotten its act together. After an investigation of the Fair Labor Association in 2010, which exposed the extreme conditions that go into getting our iPhones cheap, Apple put some pressure on them, and things seemed to have gotten better. The perpetuation of extreme behavior in Foxconn workers, as with 23-year-old Xie, who plummeted from the 18th-floor of his apartment Wednesday, might suggest Foxconn still has some work to do.

Suicide has become more than the desperate release of a nearly enslaved factory worker, there at Foxconn. It has also become a bargaining chip. 200 workers posed ready to jump to win a dispute over promised compensation. At the beginning of 2012, 150 employees made a similar threat on the roof of a factory regarding working conditions. And earlier this June, 1,000 workers rioted in that same plant upon a dispute in a company restaurant.

Some of the measures Foxconn has adapted to answer the suicide-inspiring work environment — which lead 18 workers to jump from the top of the factory, 14 of which he died — include installing safety nets. This seems to be a case of curing the symptom and not the problem. They have also hired counselors to work with the employees.


If this is the cost of getting our iPhones a little cheaper, we have to ask ourselves: is it worth it?

Paralegal / Legal Assistant Please do not apply unless you have 3 years + in Family Law / Divorce o...