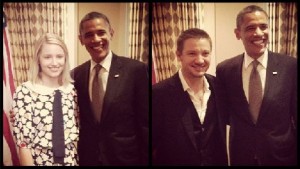 The effort is part of a strategy called “Young America Effort.” After being impressed by the attention from the leader of the nation, they went on to text their eager fans.

Agron: “Maybe the only man I truly get nervous around. Worth the early wake up call.”

Alba: “Got up bright & early to hear @BarackObama speak w an awesome group”


Somerhalder: “Totally surreal morning. Met up with some friends, had coffee with President Obama now tweeting. The 21st century… Let’s do this.” Followed by, “Just spend my morning w/this man talkn green energy, a better America&being a young American-wow.”

The medium of course bars the in-depth political issues the stars were contemplating after the event, but it did perhaps inspire countless fans to get with the cool candidate for this year’s election.