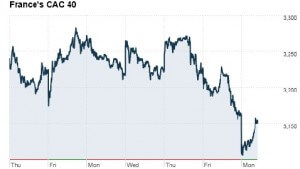 Two events have exacerbated the plight of European debt and unemployment: France’s election of Socialist Francois Hollande over former president Nicolas Sarkozy, and the seeming failure of Greece to elect a party that could form a government. The results? A sharp dip in the world market.


Greece especially is feeling it, even after coming up to 6 percent lower than their normal trading market after plummeting 8.2 percent. With around half the Greece young adults unemployed, debt is a lead social problem.

Campaigns such as Hollande’s, who won narrowly with 51.62 percent of the vote, seek to get the economy out of its crisis with growth-generating economic policies and less reliance on austerity. The alternatives between austerity and stimulation are seen to be key in Greece, France, and throughout Europe, for managing national and private debt.