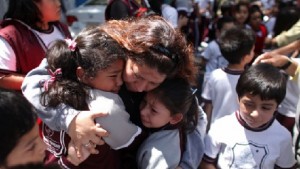 It won’t be long before people will be calling the quake in Mexico this afternoon a miracle. The quake, which hit with 7.4-magnitude, has of course caused much panic — it initially lasted half a minute, and the 5.1 aftershock was followed by hours of sustained rumblings — yet it seems that not much damage was done. Even the worst of it was, when a bridge collapsed on top a passenger bus, left no casualties. This is a striking contrast to the quake of 1985, which killed 10,000 people in Mexico City.

“It was very strong, but we didn’t see anything fall,” said Irma Ortiz, who owns a hotel in Oaxaca, near the epicenter.

The epicenter hit in Guerrero state, 15 miles from the city of Ometepec and 11 miles under ground. Its reverberations were felt all the way into Mexico City, 200 miles away. Mexican President Filipe Calderon said that “There are some broken windows, much fear, much panic.”


Thousands of residents rushed into the streets after the quake, many of them quickly blackberrying their loved ones that they were okay. In light of the 1985 quake, Mexico city, which is built on volcanic ash, will regard this as a miracle. 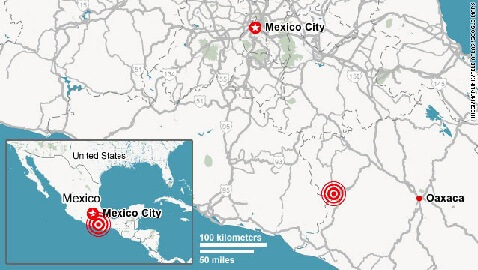