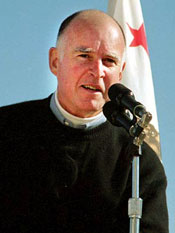 “The attorney general is inviting this court to declare a constitutional revolution,” reads a brief co-written by Kenneth Starr, dean of Pepperdine University’s law school. Starr previously exhibited his medieval moral code and complete lack of ethics as the independent counsel who investigated President Bill Clinton.

Brown initially said he would defend the measure in his role as attorney general.Â But in a dramatic reversal, he changed course two weeks ago and joined same-sex marriage supporters in asking the court to void Proposition 8, and to uphold the estimated 18,000 same-sex unions sanctioned during the four months gay marriage was legal in the state.


Brown argues that the amendment is unconstitutional because the Supreme Court established marriage as a fundamental right in its May decision striking down previous one man-one woman marriage statutes.

Starr and co-counsel Andrew Pugno maintain that the attorney general is asking the court to assume powers not granted by the Constitution.Â “The judiciary is entirely a creature of the Constitution, not an independent, freestanding guardian of minority rights or natural law,” they wrote.

Brown responded that it was the sponsors of Proposition 8 who have misunderstood the role of the courts in a democratic society.Â “Mr. Starr ignores the fundamental doctrine of judicial review and the historic duty of the Supreme Court to guard our fundamental liberties,” he said.


Lawyers for San Francisco and five other counties, as well as for gay couples who married during the four-month window, have asked the court to let stand the existing marriages even if it upholds Proposition 8.

Proposition 8’s sponsors have argued that the 14-word measure, which holds that “only marriage between a man and a woman is valid or recognized in California,” effectively bars the state from acknowledging any same-sex marriages, regardless of when they were sanctioned.


The groups have yet to announce if they plan next to go after interfaith marriages, non-Christian marriages, interracial marriages, Â or marriages between people who cannot reproduce. All of these are also banned by The Bible.