Got a tip?
Home » Lawyers » Biglaw » GOP Hires Hefty and Expensive Lawyers to Take on Obama 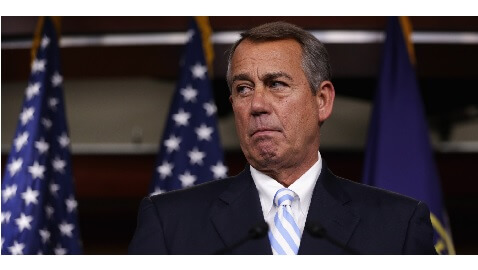 Have Republicans gone too far? Many think so, as they persist in their tenacious opposition to the Affordable Care Act, now that they’ve hired Republican attorney superstar David Rivkin to go for the throat on a specific part of the “Obamacare” plan, the decision of the White House to give employers a one-year reprieve on covering health care costs before they incur a penalty.


The House Republicans hired Rivkin and the law firm he partners at, Baker & Hostetler LLP, at a charge of $500 an hour with a hard cap of $350,000 that they will pay until the next Congress comes in during 2015.

Democrats necessarily jumped at the chance to rib John Boehner for his decision, calling it a political stunt and a waste of taxpayer money.

“Only in John Boehner’s world does it make sense to pay lawyers $500 an hour to work on a partisan lawsuit while refusing to raise the minimum wage to $10.10 for hardworking Americans trying to feed their families,” said Rep. Steve Israel (D., N.Y.), chair of the House Democrats’ campaign arm, as reported by the Wall Street Journal. Hitting the distinction between the Republicans with their $500 an hour lawyers on one side, and “hardworking Americans” and their “families” on the other, the opportunity was not lost to bash the Republican agenda.

Republicans see it differently, of course. House Administration Committee Chairwoman Candice Miller (R-Mich.) said that “No president is above nor should operate beyond the limits of the Constitution,” as stated Monday, and as the Huffington Post reported. “The president must be held accountable, and the House will continue to act in an open and transparent manner to preserve, protect, and defend the Constitution.”


Rivkin was a likely choice for this campaign as he wrote an article for the Wall Street Journal, co-authored with law professor Elizabeth Price Foley that criticized Obama and future presidents for lacking “a judicial check on unbounded executive power to suspend the law,” mentioning, as a matter of course, that such a position would give them “a powerful new weapon to destroy political accountability and democracy itself.”

A CBS News Poll from Aug. 6 demonstrated that a majority of Americans disagree with the House GOP lawsuit. Whether it is a sincere effort, and whether it will make a serious political impression, will become clear soon.