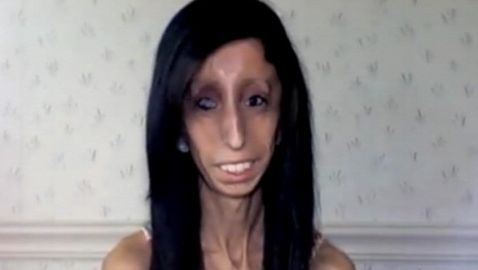 A Texas native, Lizzie Velasquez, suffers from a rare syndrome known as Neonatal Progeroid Synrdome. This syndrome prevents the woman from gaining weight and has caused her to become blind in her right eye. Velasquez is just one of three people in the world who are known to have the syndrome, according to a report in The Huffington Post.

Velasquez is 24, but looks much older because the syndrome causes accelerated aging and fat loss in the body and the face. According to the Telegraph, Velasquez eats roughly 60 small meals per day.


Not everyone is as upbeat about the syndrome as Velasquez is. In fact, when in high school, she found a video on YouTube of her that was called “World’s Ugliest Woman.” The video had received millions of views.

Velasquez used her own strength and the help of her family to rise above the cyber bullies and turned the hatred into motivation. In Austin last month, Velasquez told attendees of a TEDX talk about killing the negativity in her life with ambition and how she defined herself on her own terms.

Velasquez told the crowd that she uses humor to get past the hatred. She asks people who are rude to her to stand on the right side of her body. She also said that she is willing to be a ‘poster child’ for Weight Watchers.


“I’ve had a really difficult life, but that’s OK,” she said. “I’m going to let my goals and my success and my accomplishments define me, not my outer appearance.”