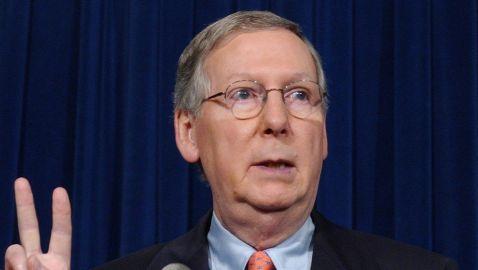 Senate Minority Leader Mitch McConnell proposed a vote on increasing the debt ceiling of the country on Thursday in a move to embarrass the Democrats. Instead, the Republican from Kentucky had to filibuster the idea when the Democratic Party decided to agree with his offer.

McConnell offered a motion to vote on legislation Thursday morning that would permit President Barack Obama to extend the borrowing limit of the country at his own discretion. The legislation then says that Congress would be given the opportunity to disapprove the increases.


McConnell obviously did not think that Senate Majority Leader Harry Reid, a Democrat from Nevada, would actually agree with his offer. Initially, Reid objected at McConnell’s idea, but then told him that it might actually turn out to be something worthwhile. The proposal was then reviewed by Senate staff and Reid returned to the floor and offered a straight up-or-down vote on it, which forced McConnell to say no.

“What we’re talking about here is a perpetual debt ceiling grant, in effect, to the president, ” McConnell said. “Matters of this level of controversy always require 60 votes.”

In order to end a filibuster during debate and hold a vote for a bill, 60 votes are required. As soon as McConnell reversed his decision, the Democrats said that his actions were a major reason why rules need to be changed when it comes to filibusters.


“What we have here is a case of the Republicans here in the Senate once again not taking yes for an answer,” Reid said. “This morning the Republican leader asked consent to have a vote on his proposal. Just now I told everyone we’re willing to have that vote, an up-or-down vote, and now the Republican leader objects to his own idea, so I guess we have a filibuster of his own bill.”

The criticisms from the Democrats did not end there. Senator Chuck Schumer, from New York, said that McConnell believed he put the Democrats in a difficult position. “It was a little too clever by half. It would have been a great moment. Sen. McConnell’s usually astute political radar was a bit off today,” Schumer said.


Senator Dick Durbin, from Illinois, said, “This may be a moment in Senate history when a senator made a proposal and, when given an opportunity for a vote on that proposal, filibustered his own proposal. I think we have reached a new spot in the history of the Senate we’ve never seen before. I don’t know how the Republicans can say they’re not abusing the filibuster after what we saw on the floor today. It’s somewhat comic, but sad as well, that we’ve reached the point where Sen. McConnell will not even accept a majority vote on his own measure.”