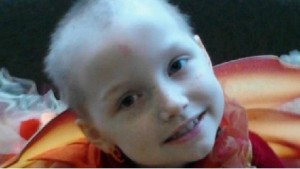 The nation is burning up over Mykayla Comstock, the 7-year-old Oregon leukemia patient who uses medical marijuana. One of the youngest members of the state’s Medical Marijuana Program, she was admitted to the program after a basketball-size tumor was found in her chest.

Mykayla takes a gram of cannabis oil in a pill each day. She says she likes the way it makes her laugh, telling The Daily Beast, “It’s like everything’s funny to me.”

It is less funny to a score of harsh critics who have blasted the parents for allowing this, ranging from the oncologist who was treating Mykayla, who disapproved of the move, and due to the subsequent strain on their relationship had to be replaced, to her biological father, who wasn’t part of the decision to get her on the pill, and who reported that he found her “stoned out of her mind,” when he visited her. He has since petitioned for child custody to investigate, but the practice is legal and state approved.


Mykayla’s has T-cell leukemia, an aggressive cancer that has gone into remission, perhaps in part due to the cannabis. That, at least, is what her parents believe could be the case, since they suspect marijuana does more than alleviate pain, but is also a medicine. Indeed, many promoters of the drug style it as a sort of panacea.

Whatever the case, it has at least been effective in taking the edge of chemotherapy. Her parents, Erin Purchase, and her boyfriend, Brandon Krenzler, whom Mykayla calls “daddy,” are proud of their decision, despite the tirades of harsh criticism.