Got a tip?
Home » Breaking News » Why Turning off Your Webcam before Sex Just Makes Good Sense 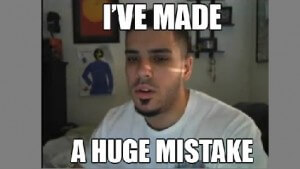 So I suppose its no surprise this thing continues to happen, especially considering the crowd. Warcraft player murdaralph kicked it up a notch when, after having finished a Mists of Pandaria livestreaming session using Twitch, he only seemed to turn off his computer for the night. Why not enjoy the remainder of the evening doing some entirely non-computer-nerd activity such as have a romp in the sack with his girlfriend? The streaming program was nevertheless left open, so his sexual escapades were laid bare for the world to see.

In response, he had his Twitch account automatically closed down. His girlfriend is also reportedly “very mad” at him, understandably enough.


So the lesson we should learn is a variation on the old one. If you’re going to engage in any amorous activity, remove your cell phone from your pocket unless you accidentally ass-dial your mother or boss or something; lock the door to your bedroom of course; and if you have a webcam, make sure that isn’t streaming you live to an eager public.