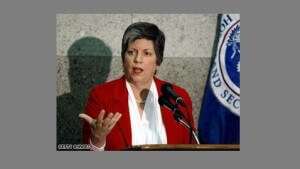 The notorious Defense of Marriage Act (DOMA) may become increasing undermined, de facto, as federal laws sidestep it. Despite DOMA defining marriage as between one man and one woman, Department of Homeland Security Secretary Janet Napolitano has declared Thursday that same-sex relationships should be equally considered in determining whether to deport an individual. And though the gist of this has been expressed before, this is the first time it has been put into writing.

“It is one of the first times that ICE [Immigration and Customs Enforcement] or DHS have recognized lesbian and gay relationships for the purpose of an immigration benefit,” said Steve Ralls, who is a spokesman for Immigration Equality, a group which advocates for lesbian and gay immigrants. “So it certainly is a big step forward in terms of the administrations’ commitment to ensuring US citizens are not separated from their same sex partners.”

Rachel Tiven, executive director for Immigration Equality, agreed with him. “This is a huge step forward. Until now LGBT families and their lawyers had nothing to rely on but an oral promise that prosecutorial discretion would include all families. Today, DHS has responded to Congress and made that promise real.”


The members of Congress she referred to include 80 House Democrats led by Minority Leader Nancy Pelosi (D-California).

The new measures affect 35,000 to 40,000 same-sex partners in the US involving an immigrant. With such de facto side-stepping of the limitations DOMA could put on these relationships, this might be a clue how the Supreme Court might rule on its constitutionality next year.