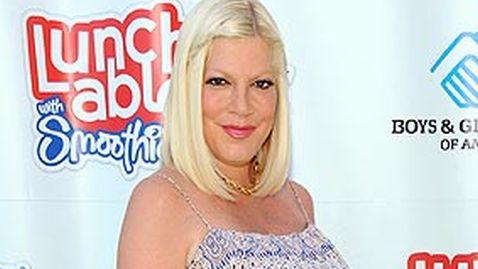 On August 30, Tori Spelling gave birth child number four, Finn Davey. On Tuesday it was reported that Spelling was back in the hospital and had to undergo emergency surgery. She underwent the surgery on September 15.

“Tori Spelling underwent emergency surgery over the weekend due to complications from her C section,” Spelling’s rep Jill Fritzo said in a statement. “She remains in the hospital and is resting comfortably.”


Spelling has not talked about the hospitalization on her website or on Twitter. But husband Dean McDermott did post the following to Twitter: “I didn’t want to alert the world. No TMZ knows. Was trying to keep it private.” He was asked about his wife’s condition and he responded with, “She’s good. Just testing (sic).”

Finn Davey was delivered via Cesarean section, the fourth for Spelling, and the second in one year. Hattie was born in October of 2011.

The couple are also parents to Liam, 5, Stella, 4 and Hattie. Another son, 13-year-old Jack, is from McDermott’s prior marriage.


Spelling made a name for herself on the hit television series ‘90201’ and is the daughter of famed television producer Aaron Spelling. Her and husband Dean have been in a series of television shows named after them, Tori & Dean.