Got a tip?
Home » Home » Former Dewey Chair Claims He is Owed $61 Million 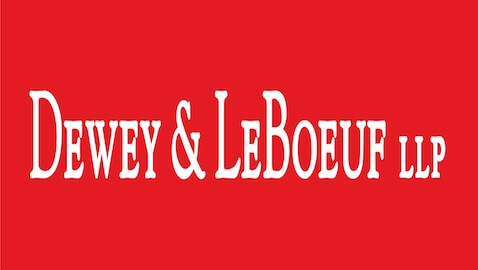 Dewey is spiraling towards implosion after one-third of its 300 partners have decided to leave the firm for competing firms. The firm had to cut salaries of almost everyone on the payroll when disappointing financial results occurred at the end of 2011. The mail room and the copy center, two basic daily operations at Dewey, have been shut down over the past couple of weeks. On Friday, the firm sent out a warning letter that employees could lose their jobs very soon. Then, this Monday, secretaries at the firm were told that Friday of this week would be their last day on the job. Partners and associates still employed by Dewey were not told the same though.


The leadership for the firm has repeatedly said that it does not have any intentions of filing for bankruptcy protection. The firm has offices in Manhattan, which are being monitored by administrators from banks controlling the firm. If the firm does decide to file for bankruptcy, partners could lose hundreds of millions of dollars. The partners are the last people to be repaid in a law firm bankruptcy behind the banks and the creditors. Partners at the firm have also expressed concern over added claims filed by creditors looking to recover lost money.

Pierce was one of the highest-paid partners for the firm, earning $6 million per year for a span of six years. Pierce worked as the chair of the original firm Dewey Ballantine. That firm merged with LeBoeuf, Lamb, Greene & MacRae in 2007 to form Dewey & LeBoeuf. Pierce works as a mergers and acquisitions lawyer and has worked on multiple cases involving the Walt Disney Company. Experts within the industry claim that the $61 million owed to Pierce could be from money partners invested in the firm, deferred retirement funds and deferred compensation. Another departure happened on Monday when Geoffrey H. Coll left for Schiff Hardin. Coll is a white-collar criminal defense lawyer based in Washington who was at Dewey for 14 years.