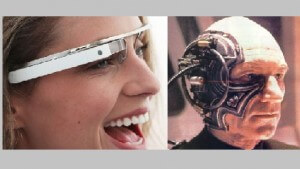 Google has revealed some teasers regarding their upcoming release of augmented reality glasses which they are developing under “Project Glass.” The product is worn like glasses but projects a Smartphone interface over your field of vision. With possible technology such as motion detection, face-recognition, and graphic reminders, the glasses resemble what life must be like for one of the Borgs from soon-no-longer-to-be science fiction series Star Trek the Next Generation. The technology is also reminiscent of shots from the Terminator Series which depicted the Terminator’s perspective: real life images are overlaid with computer interface graphics.

It’s risky business, releasing this project. Google’s Google+ project didn’t catch on, and Google is now feeling out the crowd to see what they should expect. They are of course aiming for such violent successes as Apple had with their IPod, but you never can tell.


“We’re sharing this information now because we want to start a conversation and learn from your valuable input,” said Babak Parviz and company, on the Google+ page dedicated to the project. “So we took a few design photos to show what this technology could look like and created a video to demonstrate what it might enable you to do.”

The video features a man walking about, being reminded to meet a friend, and summoning a walking map on how to arrive at the rendezvous point, and also shows him taking pictures of what he sees, and at one point booking a ticket in response to a promo flier he sees posted on a wall.

If this product catches on, we will be not only walking the streets with people whose ears are on some friend faraway, but whose eyes and minds are also in another world.