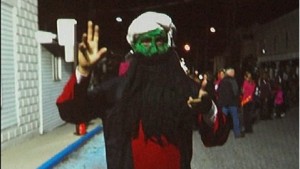 Last October, atheist Ernie Perce marched as Zombie Muhammad in a Halloween parade in Mechanicsburg, Pennsylvania. He was attacked by an irate Muslim who was concerned about Muhammad’s honor, who Perce reported “grabbed me, choked me from the back, and spun me around, to try to get my sign [which read “I am the prophet Mohammed! Zombie from the dead!”] that was wrapped around my neck.” The Muslim assaulter, Talaag Elbayomy, was subsequently charged with harassment, but the charge was dropped by District Judge Mark Martin on December 6, when he said that it was one man’s word against another and that there was no evidence of the assault.

Elbayomy’s attorney thought this was the right decision: “I think this was a good dressing down by the judge. The so-called victim was the antagonist and we introduced evidence that clearly showed his attitude towards Muslims,” he said, alleging that it is against the law to have an attitude. “The judge didn’t do anything I wouldn’t have done if I was in that position,” he added, redundantly.

Other perspectives aren’t so cheery. The judge, after claiming there was insufficient evidence to establish a case, referred to Perce as a “doofus” He said, “You have that right, but you’re way outside your bounds of First Amendment rights. I think our forefathers intended that we use the First Amendment so that we can speak our mind, not piss off other people and other cultures, which is what you did.” He made no reference to Jefferson’s anti-Trinitarian statements, in which he called the trinity “nonsense,” or any reference to the writings of Thomas Paine.


“That’s greatly disturbing to people that believe in free speech,” said George Washington University law professor Jonathan Turley. “You can say things that are hurtful to others. We hope that you don’t, but you most certainly can be protected. People like Thomas Paine spent his entire life ticking off people across the colonies.”

He’s not the only one confused by the idea that we have the right to say what we want, only if we say what is nice. The blog American Atheist wrote: “That a Muslim immigrant can assault a United States citizen in defense of his religious beliefs and walk away a free man, while the victim is chastised and insulted, is a horrible abrogation.”

Martin’s defense of his decision cited his military service: “It just amazes me that people think I’m biased towards Islam. I got sniped at once, I got ambushed once [in Iran and Afghanistan during his military service] I got attacked by a mob once… I’ve served close to 27 years in the military — and have gone overseas, — exactly to preserve that right [freedom of speech].” He added: “With rights come responsibilities. The more people abuse their rights, the more likely that we’re gong to lose them,” he said, suggesting that a right was in fact a privilege. “We need to start policing up our own actions, using common sense, in how we deal with others.”


Said Perce in an interview: “He let a man who is Muslim, because of his preference of his culture and his way of life, walk free from an attack.”