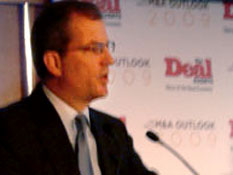 Thomson Reuters reports that global deal volume dropped by a full one-third in 2008, and is expected to fall further next year.

Total deal volume dropped about 32% to $2.89 trillion, the lowest annual number since 2005. Q4 numbers were even worse, with M&A volume dropping 44% globally over the last three months compared to 2007; US deal volume plummeted 55% in the same period.

The more than 1,100 agreed-upon deals that collapsed in 2008 represent a record. These include BHP Billiton’s attempted takeover of mining rival Rio Tinto, and the failed private equity buyout of Bell Canada.


Private equity-sponsored deals fell by 72% percent to a five-year low.

Hostile takeovers represented the only bright spot, something experts say is typical in down periods when companies that are still strong look to feast on the weak.

The highlight in this category, of course, was InBev’s $52 billion takeover of Anheuser-Busch, a deal that helped JPMorgan Chase clinch the number one rank among financial advisors in European deals.


Paul Parker of global M&A at Barclays Capital told Reuters he expects deal volume to drop another 30 percent next year, to about $2 trillion.