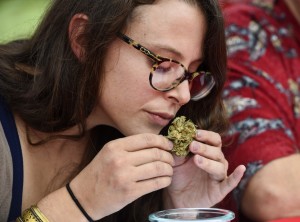 Nearly a year ago, on February 25, 2015, marijuana officially became legal in Washington, DC. Lately, the question of whether smoking in public “cannabis clubs” should be allowed under the District’s law has been hotly debated. The current plan proposed by Vincent Orange of the DC City Council will allow up to eight regulated businesses to provide separate social spaces where marijuana can be consumed by those 21 and older. However, Mayor Muriel Bowser opposes this measure, insisting that the law was intended to allow only private marijuana use within homes.

Voters overwhelmingly supported marijuana legalization on voting day, November 4, 2014. The voter-proposed measure Initiative 71 allowed DC residents and visitors over age 21 to legally possess up to two ounces of marijuana, and to grow up to three marijuana plants in their homes.


In the case of marijuana legalization, there was some question whether congress would use their authority to pass a “resolution of disapproval” to overturn local DC laws. However, they didn’t exercise this right in the case of legalizing pot in DC. They did pass legislation in December 2014 banning the use of federally appropriated money to “enact any law, rule, or regulation to legalize” marijuana, but DC Mayor Muriel Bowser maintained that, because the law didn’t involve spending any money, Congress’s legislation was irrelevant.

“To exercise exclusive Legislation in all Cases whatsoever, over such District (not exceeding ten Miles square) as may, by Cession of particular States, and the acceptance of Congress, become the Seat of the Government of the United States…”

In 1973, the Home Rule Act allowed DC some degree of self-governance in the form of an elected mayor and city council, but Congress still technically has the last say. According to Wikipedia, the Home Rule Act makes it clear that, among other restrictions, DC cannot “enact a local budget that is not balanced,” thereby granting Congress ultimate authority over the DC budget.

Ultimately, marijuana legalization passed without issue, and the drug became legal in the District of Columbia. Mayor Muriel Bowser did, however, have one concern about legalized marijuana. On February 26, 2015, the day after marijuana officially became legal, she sent emergency legislation to the D.C. Council prohibiting “nightclubs, private membership clubs and virtually any other city-registered business from providing a venue for social marijuana smoking.”


The Mayor’s concern was the assertion of some activists that “the initiative could allow the formation of ŌĆ£cannabis clubs,ŌĆØ like those prevalent in Spain, which offer membership fees and access to the drug.”

Now, the conversation has started up again. In early January, the DC City Council voted to “allow pot smoking at rooftop bars, sidewalk patios and most any other place a city resident declared to be a private pot club.” However, this change in city laws lasted less than 30 minutes. This week, Bowser petitioned the City Council to keep her authority to shut down “Amsterdam-style pot clubs” permanently, warning that the city “would have no power to regulate them because of [the monetary] restrictions from Congress.

As it stands, the legality of forming “cannabis clubs” for the purpose of smoking pot in shared public spaces is up in the air. The public will have to see what decisions the DC City Council and Mayor Bowser make.