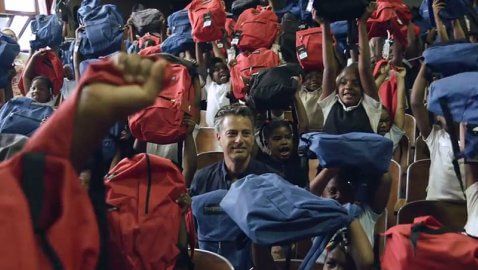 Summary: Mike Morse and his law firm saw that around 23,000 students were unable to afford school supplies so they decided to step up and fill that need.

Schools have officially started throughout the country and there are children in every school that do not have school supplies, especially a backpack. One Detroit lawyer and his firm, Mike Morse Law Firm, have decided to take on this problem in Detroit.


The firm first gave 400 backpacks to students at Wayne Elementary School in kindergarten through fifth grade. They saw how successful it was and so they asked what the need was. Morse said, ‚ÄúLet‚Äôs do this in a bigger way. Let‚Äôs find out how many kids there are in the Detroit Public School System, K through 5 range. We found out there was 23,000 of them.‚Äù There was a big need so they decided to up the donation to over $250,000 so that it could help the 23,000 kids in need.

They gave the money to the Kids In Need Foundation to buy the backpacks and needed supplies. Each backpack is valued at $20 and includes items like markers, crayons, erasers, and notebooks. The backpacks were given out at the beginning of September to the students at 65 schools.

The firm is already preparing for next year by raising money and creating a Crowdrise fund for others to help raise money. Morse wants the students to know ‚Äúthat there are people out there in the community that care about them. They want them to succeed …¬Ýto win at life.‚Äù