Got a tip?
Home » Breaking News » Defendant Eats His Own Feces During Trial 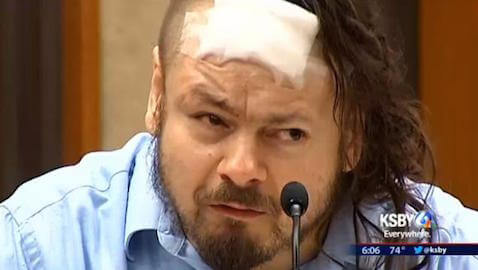 Summary: A defendant who has pleaded not guilty by way of insanity shocked a courtroom when he defecated in his pants and ate his own feces during his trial.

According to a disturbing story from Inquisitr, Andrew Gilbertson is certainly trying to convince the judge and jury in his bank robbery trial that he is insane.


In 2013, Gilbertson apparently robbed a bank in San Luis Obispo, California. Gilbertson allegedly disguised himself with a hat and carried a pink kidŌĆÖs backpack. He went into the bank and gave bank tellers a note demanding cash. Gilbertson then left the bank with an undisclosed amount of money, but police caught up to him a few hours later. Gilbertson still had the hat, the backpack, the money, and the note with him.

An attorney was found guilty of licking a clientŌĆÖs ear.

Gilbertson pleaded not guilty to the charges by reason of insanity. According to Gilbertson, the Virgin Mary suggested GilbertsonŌĆÖs disguise for the crime. On Wednesday, Gilbertson took the stand, and at some point defecated in his pants. To the horror of the courtroom, he then reached into his pants and began eating some of his feces.

Judge Donald Umhofer, the presiding judge, called for a recess in the trial.

Again, Gilberton claimed that the Virgin Mary told him to do so.

A flight attended caused flight delays and panic due to her crazy ranting.

When the trial resumed, a mental health expert testified that Gilbertson suffers auditory hallucinations, and his himself in the head to stop them. Additionally, Gilbertson is not taking any anti-psychotic medication. According to the Huffington Post, Gilbertson was previously charged with sexual assault.

A Kansas attorney was disbarred for ŌĆ£inexplicable incompetenceŌĆØ when he dressed up like Thomas Jefferson in court, among other incidents.

Next, the prosecution will have the chance to cross-examine the mental health expert on GilbertsonŌĆÖs psychological health, although it seems that Gilbertson has already made his case.

According to the New York Daily News, Gilbertson, 40, is a resident of Paso Robles.