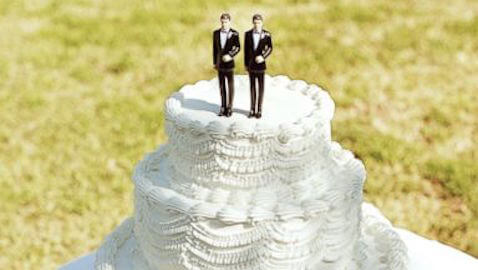 Summary: As the debate on same-sex marriage continues, many ponder whether wedding vendors must provide their services to same-sex couples.

According to The Blaze, a recent survey shows slightly more Americans are in favor of same-sex marriage than against it. In that same survey, released by the Associated Press, people were also more willing to support the denial of wedding services to gay couples on religious grounds.


A single case may determine the fate of same-sex marriage across the United States.

However, half of the respondents stated that state and local officials and judges who issue marriage licenses in jurisdictions where same-sex marriage is legal should be exempt from doing so if they object based on religious grounds. However, 46 percent said that the officials should not be exempt from performing such services.


In October, the Supreme Court rejected hearing the appeals of gay marriage bans.

In response to a different question, 57 percent of survey-takers supported the right for business owners who provide wedding products and services to refuse the business of same-sex couples. In contrast, 39 percent rejected this right.

The survey was conducted from January 29, 2015 to February 2, 2015. The survey was completed by 1,045 American adults, with the margin of sampling error at plus or minus 3.5 percentage points.

The debate on same-sex marriage has led to a variety of other debates in recent months, such as whether bakeries must provide wedding cakes for same-sex couples. The Huffington Post notes that a Colorado baker was ordered to provide services to a gay couple, even though he identifies himself as a devout Christian. On a related note, a Christian printing company refused to print for a gay pride organization, and some counties in Florida have halted performance of all weddings, both same-sex and opposite-sex, to skirt the requirement to allow same-sex marriage. The Supreme Court recently declined to hear the case of a photographer who denied services to a gay couple, according to the Washington Post.