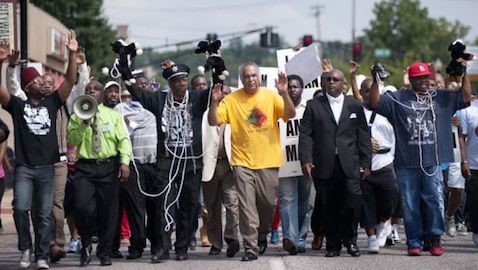 Summary: A black teenager, Vonderrit Myers, was shot and killed by a white police officer after the teen allegedly fired at the cop.

Just a few miles south of Ferguson, Missouri, where a black teenager, Michael Brown, was fatally shot by a white police officer a couple of months ago, another teenager has lost his life in a police shooting.


On Wednesday night, a white-off duty police officer shot and killed Vonderrit Myers, Jr, an 18-year-old black teenager. Police maintain that Myers fired at the officer, which resulted in a chase and, ultimately, the shooting of Myers, the Christian Science Monitor reports.

The shooting occurred in the Shaw neighborhood of St. Louis. The river city has struggled against racial segregation and oppression, and tensions are expected to continue to rise as a result of the shooting. However, the area is generally a low-crime one.

Protests and riots in the Ferguson area became so chaotic and dangerous that Governor Jay Nixon was forced to call in the National Guard.


In total, 17 shots were fired by the police officer, who remains unnamed. The police immediately provided details, in an effort to provide additional transparency to police shootings after the Michael Brown incident.

However, the details from police did not calm the crowd that began to gather. Several hundred protestors assembled, shouting ŌĆ£**** the policeŌĆØ and ŌĆ£hands up, donŌĆÖt shoot.ŌĆØ The group also loudly banged on police cars. Although a witness said that gunshots were heard, police did not break up the protests and they did not wear riot gear. No arrests were made. St. Louis police chief Sam Dotson said that the police ŌĆ£acted with great restraintŌĆØ when dealing with the furious mob.


Myers’┬Āfamily insists that he only carried a sandwich and was unarmed.

The officer who shot Myers┬Āwas wearing his police city uniform, but was working a private security job when he stopped three males who fled when the officer drove past them. The officer gave chase and eventually caught Myers. A ŌĆ£physical altercationŌĆØ resulted, and Myers’┬Āgray-hooded sweater was pulled off. According to the officer, Myers┬Āreached for his waist as he struggled, which made the officer believe the teenager had a gun. The officer did not fire at that point ŌĆ£because he wanted to be certain it was a gun.ŌĆØ

Myers┬Āthen fired at the officer, discharging three bullets before his gun jammed. At that point, the officer returned fire, which killed Myers. Police added that Myers┬Āhad previous altercations with the law.

The incident only served to further deteriorate the relationship between local police officers and the black population, which has declined rapidly since the Michael Brown shooting. Next month, a grand jury will decide if Ferguson Police Officer Darren Wilson will be indicted for the shooting. Should the grand jury decide not to indict Wilson, city officials are preparing for an uproar.

Supporters of Wilson feel that evidence will demonstrate that Brown turned to rush Wilson when he was shot. Police also stated that Brown had punched Wilson and tried to grab the officerŌĆÖs gun.

At the end of last month, the Department of Justice suggested that Ferguson Police Chief Tom Jackson tell his officers that the armbands they wore that said ŌĆ£I Am Darren WilsonŌĆØ will only add fuel to the fire. Christy Lopez, a deputy chief in the Civil Rights Division, said that the armbands ŌĆ£reinforce the very ŌĆśus versus themŌĆÖ mentality that many residents of Ferguson believe exists.ŌĆØ

Many black protestors have begun picketing local events. White residents have been surprised that black residents felt so oppressed. During a St. Louis Cardinals baseball game on Tuesday, nasty words were exchanged between black and white citizens, with one white resident stating, ŌĆ£If you were all working, we wouldnŌĆÖt have this problem.ŌĆØ

WednesdayŌĆÖs shooting is the third one in two months where a white police officer shot and killed a black man. Shortly after the Michael Brown shooting, St. Louis officers shot and killed a man who was suffering from mental illness. The man refused orders to drop a knife.