Got a tip?
Home » Law Life » Anna Binkovitz Has the Response to Anyone Who Says “A Woman Was Asking For It” 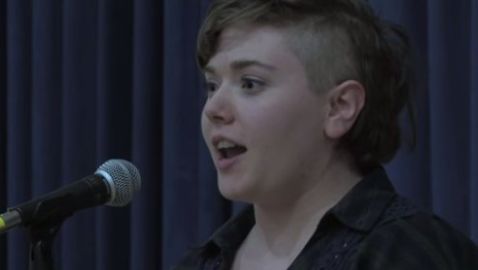 Anna Binkovitz is a poet who has made a name for herself on multiple social media sites, including Facebook. She recorded a poem that was picked up by Upworthy. She says on Facebook that it is her favorite poem to perform. We have embedded the video of her performing the poem at the bottom of this post, courtesy of Upworthy. We hope you enjoy it.

The video is just under three minutes long, at 2:59, and it is definitely worth your time to take a look.


Binkovitz compared the adage that ‘women are asking for it’ when they dress a certain way if they are attacked to having to wear a different outfit for everything we want in life. For example, Binkovitz says that if she is out to dinner with her mother and wants the salt that is on the table, does she have to change into a salt costume or outfit?

Binkovitz said that she will ask for the salt; plain and simple. She makes it known that the best thing about having sex with adults is that the people involved can ask for what they want in bed.

She then engages her viewers to imagine living in a world where we have to wear various outfits to express what we want no matter where we are at the time. She talks about being in an airport, at a steakhouse and putting on a 911 costume to call the authorities.


Just be warned, there is some explicit language in this poem so be careful if watching it at work or in front of the children.