Got a tip?
Home » Weird News » Family of Eight Accused of Abusing Sibling for a Decade 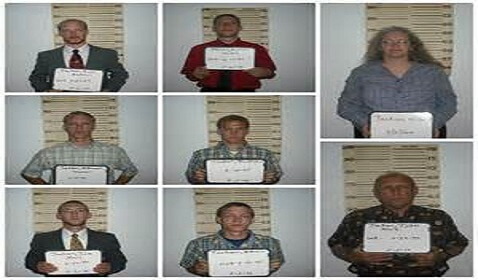 In a small county, in Northeast North Carolina, a sheriff says he is “disgusted” by the parents of six men who are accused of sexually abusing their sister for nearly a decade, at a private family compound.

According to The Huffington Post, on Tuesday, Perquimans County Sheriff, Eric Tilley said “I blame the parents for this, it’s your responsibility as a parent to teach your children right and wrong. When you see a child doing something that is totally wrong and you don’t correct them, then the child thinks it’s OK.


Sheriff Tilley said his deputies charged the six brothers, ranging in age from 19 to 27, on May 6, with a number of crimes related to the alleged sexual abuse of their 16 year old sister. He said the alleged abuse began when the girl was 4 years old and continued until she was almost 15.

The brother have been identified by authorities as Aaron Jackson, 19, Benjamin Jackson, 19, Nathaniel Jackson, 21, Mathew Jackson, 23, Jon Jackson, 25, and Eric Jackson, 27. Charges against the brothers range from rape to sexual assault, according to Sheriff Tilley.

The father, John Jackson, 65, and the mother Nita Jackson, 54, both face felony child abuse. “Part of the investigation revealed that, at one point, the mother observed some of this activity and never did anything about it, “Tilley said of the charges against the parents. The family was described as “bizarre” by the sheriff and said he believes the father is “anti-government” and “anti-schools.” The children were home schooled with very limited education,” said the sheriff. “They were very private and the whole yard has a fence around it–like a little compound. They’re very different.”


The abuse allegations surfaced in December 2012, when one of the brothers, Eric Jackson, 27, allegedly told the pastor at Hope Baptist Church in Wake Forest, North Carolina, about the alleged abuse. “He confided in his pastor and his pastor told him that was wrong and not the way normal families are,”said Tilley. After speaking with the pastor, he allegedly went to the Sheriff’s office and told them that he, along with five of his siblings, had been sexually abusing their sister. “From there, we had two more brothers confirm what he said,” Tilley said.

Even with the confessions from the brothers, authorities need proof to make an arrest in the case, in order to do that, they needed to speak with the alleged victim. The parents refused to let authorities speak with the girl and soon moved to Colorado. The authorities in Colorado were notified, and the Department of Human Services in Colorado Springs took custody of the girl. It was then, Tilley said, that his deputies were able to talk to the girl about the alleged sexual abuse.


Investigators were sent to Colorado to speak with the girl, where she confirmed everything her brothers said. In April the case went to the Grand Jury in North Carolina. The parents and brothers have been indicted. All six brothers were arrested on May 6, and are held on a $150,000 bond. The parents are free on a $15,000 bond. “I never thought this case would go anywhere because we could never get any cooperation, but they sealed their own fate when they moved to Colorado and that the girl was ready to talk,” Tilley said.