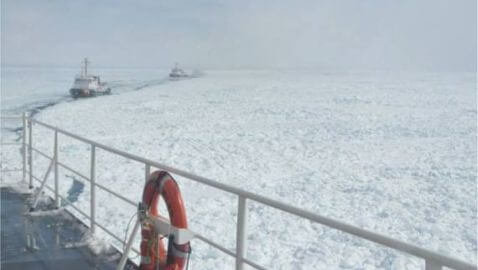 It has been more than a month since the ice covering the Great Lakes reached near-record highs, but the amount remaining could have major impacts on the environment in the months and years ahead, according to The Huffington Post.


The remaining ice is causing problems for the region. CBS Chicago reported that a Coast Guard cutter was used to create a rout to Marquette, Michigan so coal could be delivered from Duluth, Minnesota. The shores of Lake Superior are still 64-percent frozen. CBS also reported that the ice is some two-feet thick in Marquette Harbor.

An ‘unprecedented’ number of duck deaths throughout the region are being blamed on the ice too. The Atlantic Cities said that disruptions to the fish ecosystem could also occur because of delays in egg laying due to the ice.

Since records started being kept in 1973, the only other April that saw such a large amount of ice remaining on the lakes was back in 1994. In 1994, 23-percent of the lakes were still frozen.


Want to see which science jobs are available near you? Click here to see.