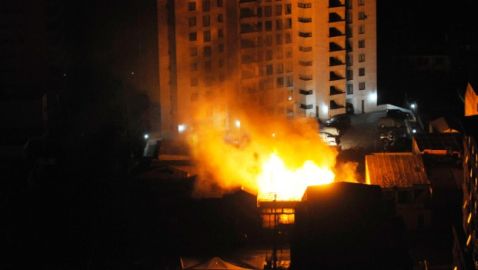 Late Tuesday an earthquake with 8.2 magnitude struck off the northern coast of Chile, according to multiple media reports, including CNN. Small landslides, power outages and a tsunami were all side effects of the earthquake.

Five people have been killed as a result of the natural disaster. Two of the five suffered heart attacks and the other three were crushed, according to Interior Minister Rodrigo Penailillo.


Penailillo also said that some 300 prisoners escaped from the port city of Iquique following the earthquake, which hit around 8:46 p.m. local time. The U.S. Geological Survey said that the depth of the quake was 12.5 miles.

Coastal residents were asked to evacuate by the Chile National Emergency Office.

“The fact is, we will know the extent of the damage as time goes by and when we inspect the areas in the light of day,” Chile’s President Michelle Bachelet said early Wednesday. “The country has faced these first emergency hours very well.”


The port city of Antofagasta say heavy traffic in streets as residents walked to higher ground.

“Many people are fearful after experiencing the powerful earthquake in 2010, so they immediately fled for higher ground when they heard the tsunami warning,” said Fabrizio Guzman, World Vision emergency communications manager in Chile.


“There have been multiple aftershocks and communications have been cut off in many of the affected areas. So people are waiting in the dark hills not knowing what is to come, and hoping they will be able to return to their homes safely.”

Multiple tsunami warnings were issued by the Pacific Tsunami Warning Center. All of the warnings were canceled as of Wednesday morning. The Tsunami watches that reached Mexico’s Pacific coast, were also canceled on Wednesday.

On the coast of Pisagua, Tsunami waves measuring six-feet and higher washed ashore. Seven-foot waves were seen at Iquique.

When the quake struck Tuesday night, the U.S. National Tsunami Warning Center worked to find a danger level for Washington, Oregon, California and Alaska. It also looked at the danger for Canada’s British Columbia.

Gerard Fryer, a geophysicist with the Pacific Tsunami Warning Center, said that there is “clearly not going to be any hazards to the coastline of North America.”