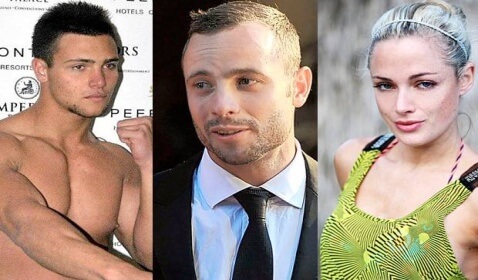 Oscar Pistorius is a Paralympics champion. The paralympic is known to fans as “Blade Runner.” The South African sprint runner, Pistorius although born with both of his legs, had to have them amputated below the knee when he was 11 months old. Oscar Pistorius competes in events for single below-knee amputees and for able-bodied athletes.

In February 2013, Oscar Pistorius was charged with the murder of his girlfriend, Reeva Steenkamp, whom he had fatally shot at his home. Reeva Steenkamp was declared dead at the scene after being hit in the head, arm and hip from three bullets from a 9 mm pistol, according to repby Reuters. ABC News has reported that one month before Pistorius shot and killed his girlfriend Reeva Steenkamp in January 2013, that the South African athlete accidentally fired a gun in a crowded restaurant last year and then asked a friend to take the blame, according to testimony by professional boxer Kenin Lerena, who was a surprise witness at Oscar Pistorius’ murder trial.


On the first day of the Oscar Pistorius murder trial, ABC News reported that a neighbor Michelle Burger testified about gunshots and “bloodcurdling screams” she heard coming from the Olympic sprinter’s residence the night he shot Reeva Steenkamp.

Oscar Pistorius, one of South Africa’s most famous figures, claims he mistook Reeva Steenkamp for an intruder during the night. If convicted, Oscar Pistorius could face at least 25 years in prison.