Got a tip?
Home » Breaking News » Not Just a Huge Pile of Fur 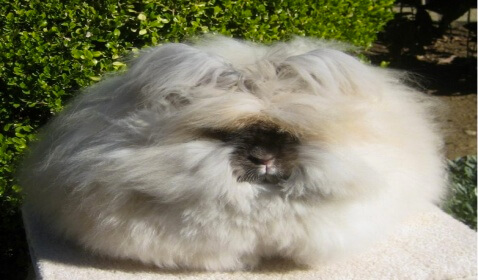 Professor Betty Chu, told The Huffington Post that she breeds her own Angora rabbits to display at shows and the article which featured the San Jose State University professor, shared photos of the litter box trained rabbits. The Angora is one of the oldest types of domestic rabbit, originating in Turkey, along with the Angora cat and Angora goat. The rabbits were popular pets with French royalty in the mid-18th century, and spread to other parts of Europe by the end of the century. They first appeared in the United States in the early 20th century. They are bred largely for their long Angora wool, which may be removed by shearing, combing, or plucking. There are many individual breeds of Angora rabbits, four of which are recognized by American Rabbit Breeders’ Association. Rabbits of the Angora breed are adorned with “fur”, growths of wool on the ears and the entire face except above the nose, and front feet, along with their thick body, and wool. They are gentle in nature, but they are not recommended for those who do not groom their animals. Their wool is very dense and needs to be groomed twice a week. Betty Chu says that, in order to get her bunny to be this fluffy, she uses a blower to arrange its wool.

Since rabbits ingest their wool when they groom themselves, clipping their wool at least once every 90 days is considered a must to prevent wool block from occurring. A dietary supplement of papaya in their diet helps wool to break down in their digestive tract. The wool swallowed by a rabbit cannot be coughed or vomited up, and will cause it to slowly starve to death as its digestive tract fills up with ingested wool; if left untreated, wool block can lead to death. It is widely held among serious Angora breeders that ample cage space to exercise and feeding fresh, horse-quality hay on a daily basis will help keep the wool moving through the system and prevent wool block. According to Chu the wool grows at the rate of one inch a month and can be cut with scissors.


Betty Chu has won has won numerous competitions with her 6 to seven pound Angora rabbits, which Chu says are, “also very lovable, they can be litter box trained like cats and they would follow owners like dogs.”