Got a tip?
Home » Celebrity News » Justin Bieber in Panama while Decision on Egging Charge Nears 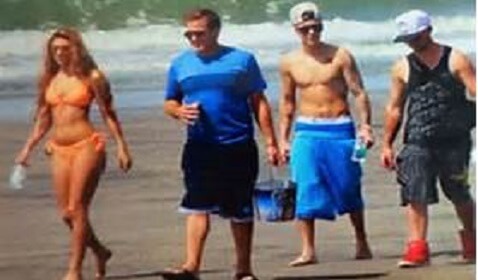 A prosecutor in Los Angeles will decide this week if Justin Bieber will be charged with a felony, while Bieber relaxes on the beach in Panama.

The charge stems from an egging of a neighbors mansion, that could lead him into some serious trouble. If he’s lucky he’ll get probation if not, Bieber will face a felony charge and that could carry some jail time.


Bieber who flew in a private jet into Panama City, was seen strolling on the beach, kicking a soccer ball around and relaxing with friends and new girlfriend model Chantel Jeffries.

According to CNN, while Bieber relaxed in Panama, detectives watched security videos seized from the pop-stars California Mansion, and are very close to presenting the egg attack as evidence to the Los Angeles district attorney.

“We will have a dialogue with the district attorney and determine, based on what we have, when we should bring the case over,” Los Angeles County Sheriff’s Lt. David Thompson told CNN on Friday. “We will then take the case to the D.A. It will be up to them to file charges and what charges at the time.” If convicted of a felony, he would need a probation officer to approve any travel outside of California and that could possibly put a halt on any touring for Bieber, putting a hurt on his income and fame. For jobs with Los Angeles law enforcement, click here.