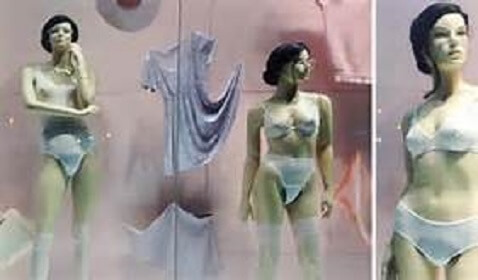 The ever so dubious retailer, American Apparel, has shocked customers and pedestrians again. If you happen to be in the neighborhood of East Houston street in New York City, stop by the American Apparel store’s window and be prepared because the mannequins are adorned with pubic hair.

According to the Huffington Post an associate at the store said the mannequins are meant to send the image of “rawness and realness of sexuality.” Apparently it’s working. Crowds of people are starting to surround the stores windows, taking pictures. Hopefully the stir will bring in customers for Valentines Day.


The founder and CEO of American Apparel, doesn’t have a problem with shock imagery when relating to the female genitalia, or when stating it as empowerment of the female body.

In 2011, American Apparel released an ad that showed a model wearing sheer underwear with visible pubic hair. Last fall, the store was said to have sold a graphic T-shirt with a picture of a menstruating vagina with of course, pubic hair. American Apparel has a long history of using pubic hair in it’s representation, kind of a shock value strategy that American Apparel trademarks. While more conservative shoppers will retreat from the shocking image, the jaded and desensitized millennial generation will probably find it ironic or otherwise un-funny, while tweeting about it as a meme. For jobs at American Apparel, click here.