Got a tip?
Home » Legal News » Law Clerk for Federal Judge Arrested for Solicitation of Child 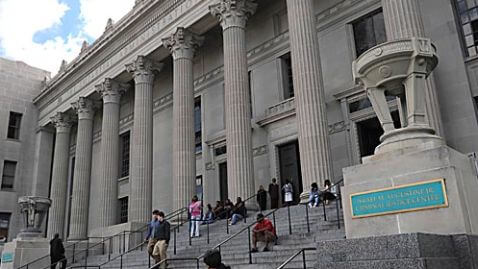 Thomas Jackson, a law clerk for a federal judge in New Orleans, pled guilty to charges of soliciting sex with a 10-year-old boy on the Internet, according to The Times-Picayune. Jackson was actually talking with an FBI agent online. Jackson was arraigned in Orleans Parish Criminal District Court. The charges filed against him include computer solicitation of a minor younger than 13 and attempted aggravated rape.

Jackson issued a plea of not guilty on all of his charges. Jackson works as a law clerk for U.S. District Judge Susie Morgan. His arrest was made on Wednesday and his employment was terminated on Thursday.


The original charge of computer solicitation garnered bond of $5,000 from Orleans Judge Frank Marullo. On Thursday, the attempted rape charge was added by prosecutors working on the case.

Jackson then made a court appearance in front of Judge Keva Landrum-Johnson. The judge set bond at $30,000 per charge and ordered Jackson to surrender his passport. Jackson was also ordered to not have contact with children and was placed on a program that monitors him electronically.

In December, Jackson contacted a man using GRINDR, which is a mobile application for a gay networking site. Jackson told the man he would pay $500 to have sex with a boy under the age of 11. The user turned the conversation over to the FBI.


Court documents show that M. Allison, an FBI agent, began acting as the person Jackson was interacting with on GRINDR. Jackson and the agent spoke on December 30 when the agent said he found a 10-year-old boy. Jackson said, “Hook it up!!:)”

Once the meeting was scheduled, for last week at Banks and St. Anthony streets in New Orleans, Jackson was arrested. Allison was in attendance along with a police officer from the city named Christopher Harris.


Jackson was arrested around 7:25 PM and according to officers, four condoms were found along with silicon lubricant and herbal aphrodisiacs.

Jackson is a 2008 graduate of Tulane Law School. He left there with a 4.0 GPA. He worked as the Tulane Law Review editor and the editor of the Law and Sexuality publication.

“The man was arrested on one thing, based on some factual allegations, and if those facts are correct, is a reasonable arrest and the bond was a reasonable bond,” Jackson’s attorney, Frank DeSalvo, said. “Unfortunately, the district attorney and Judge Marullo are like oil and water. … If he had gotten the bond set somewhere else, I don’t think those additional charges would have been filed.”