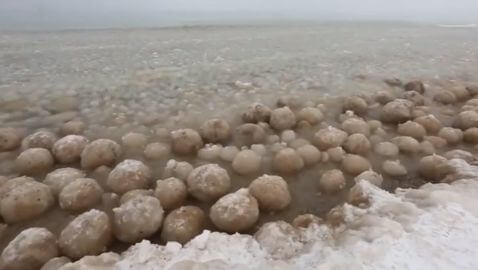 Lake Michigan has been overrun with massive ice balls as the ‘polar vortex’ begins to ease its grip on the Midwest portion of the country. A user of YouTube uploaded a homemade video of the large collection of ice balls in the lake. The video was taken in Glen Arbor, Michigan. There are what looks to be thousands of ice balls in the lake that are moving with the water. They are almost as large as boulders, according to The Huffington Post.

According to Annie Lipscomb, the ice balls are created when pieces of ice break away from the ice sheets that cover the lake during the winter months. Lipscomb is a park ranger for the Sleeping Bear Dunes National Lakeshore. She spoke with MLive about the phenomenon. The ice balls take their shape when the waves in the lake toss them about the body of water.


Jim Andrews is a meteorologist with AccuWeather.com. He said that the ice balls could continue to increase in size if the temperatures stay cold enough. He said that more and more ice will be added much “like a snowball or like a hailstone.” Multiple layers of water go around the ice ball and then freeze.

Something close to the same phenomenon happened last year at Good Harbor Bay in Lake Michigan. At the time, the deputy superintendent at Sleeping Bear Dunes National Lakeshore, Tom Ulrich, said, “It’s not that it never happens and this is a once in a decade thing. It happens more often than that, but these are very large and got bigger than they normally get.”