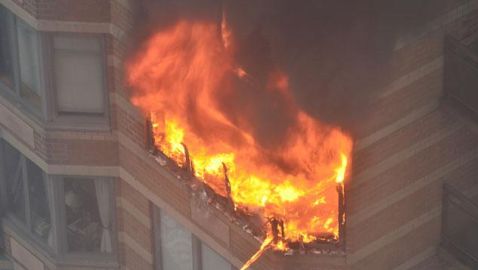 A massive fire in a high rise in Manhattan killed one man and critically injured another on Sunday morning, according to fire officials. Daniel McClung, 27, died at an area hospital from his wounds suffered in the blaze. His husband, 23-year-old Michael Todd Cohen, is in critical condition. The two were discovered in a stairwell close to the 31st floor.

The blaze occurred in The Strand condominium and it reached three alarms. The building is located on West 43rd Street. The two men were suffering from burns and smoke inhalation when found in the stairwell. The couple married in July, according to NBC 4 New York.


The fire started in a hallway on the 20th floor of the building and more than 200 firefighters were needed to extinguish the blaze. The crews needed an hour and 40 minutes to control the fire.

“In a building this size, it takes a lot of firefighters to get up to the upper floors,” assistant chief John Sudnik said. “It requires a lot of resources and it takes time.”

The cause of the fire is still under investigation. The owner of the apartment where the blaze began said he left prior to the fire to go to the store. Multiple residents and some firefighters suffered minor injuries in the fire.


“If people would have stayed in and opened a window in their apartment and stayed near the window and waited for the fire department to come, they would have been better off,” Sudnik says.

One resident, George Galey, lives 12 floors above where the fire started. Galey said there was smoke damage in his apartment.


“First thing I thought it was fog,” he said. “Then I couldn’t see the building across street. I knew it was more than fog, it was smoke.”

Firefighters said it would be hours until residents would be allowed back in the building. The Red Cross was on the scene to help all of the displaced residents.

We are a small civil litigation firm in Henderson, NV with immediate availability. We also have a 7 ...

Expanding insurance defense firm is seeking a New Jersey attorney with 1-3 years of experience in Wo...