Got a tip?
Home » Breaking News » At Least One Dozen Hospitalized after Explosion at Minneapolis Building 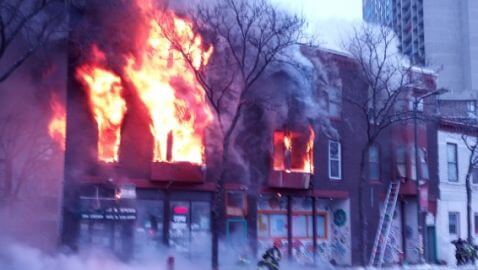 At least 13 people have been hospitalized after an explosion and a fire at a Minneapolis, Minnesota building, according to KARE 11.

The explosion occurred at 516 Cedar Avenue South around 8:16 a.m. local time. According to Minneapolis Fire Chief John Fruetel, the victims were outside the building when firefighters arrived on scene and flames were shooting out windows on every floor of the building.


Firefighters attempted to enter the building, but had to exit when conditions became life-threatening. The 13 victims were taken to a variety of hospitals in the region, according to Hennepin County EMS member Robert Ball. Ball said the injuries range from burns to trauma. The trauma occurred when victims jumped from windows to escape the fire. Six of the 13 victims have been listed as critical.

It is unknown if anyone else is trapped inside the building and crews will search when the fire is under control. Residents will be interviewed to determine if anyone died in the explosion and subsequent fire.

“This is a tragic morning for the City of Minneapolis,” Mayor-elect Betsy Hodges said.


The first floor of the structure is home to the Otanga Grocery, according to the website for Hennepin County. The second and third floors of the building are apartments.

The call reached three alarms, which sent firefighters screaming to the scene as the second and third floors of the building collapsed. Fruetel noted that the freezing conditions are making it difficult to extinguish the flames. Fruetel believes that fire crews will be on the scene throughout the day.