Got a tip?
Home » Breaking News » Another Bombing in Volgograd as Winter Olympics Near 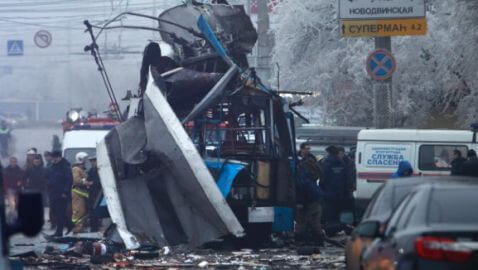 On Monday, another suspected suicide bombing hit the city of Volgograd in Russia. This bombing killed 14 and exposes the security issues in the country as it approaches the Winter Olympics, according to CNN.

The latest attack, an explosion that rocked a trolleybus in front of a market during the morning rush, came one day after an explosion rocked a Volgograd train station that killed 17 people and wounded some 35 more.


“This strike, which was cynically planned for the period of preparations for New Year’s celebrations, is one more attempt by terrorists to open a domestic front, sow panic and chaos, and trigger religious strife and conflicts in Russian society,” a statement by Russia’s Foreign Affairs Ministry said.

“We will not back down and will continue our tough and consistent offensive” against terrorists, the statement said.

Responsibility has yet to be claimed for the attacks, but they come just months after the leader of a Chechen separatist group pledged that violence would interrupt the Sochi Winter Olympics in 2014. The games begin on February 7, 2014.

Bach also wrote the following to Russian President Vladimir Putin about “our confidence in the Russian authorities to deliver safe and secure Games in Sochi.”


According to video footage of the blast on Monday, it seems as though it occurred in the rear of the bus and was carried out by a male suicide bomber. It is believed that a suicide bomber also carried out the bombing at the train station on Sunday.

Back in July, the head of Caucasus Emirate, Doku Umarov, published a video that vowed ‘maximum force’ to interrupt the Sochi Winter Olympic games. A reward of $5 million has been offered by the U.S. State Department for the location of Umarov.

“Most of the militants responsible for terrorist attacks in Russia over the last decade — including female suicide bombers who have taken part in 20 attacks claiming at least 780 lives since June 2000 — have come from Dagestan,” RIA Novosti reported Monday.

The two men who were responsible for the bombings at the Boston Marathon lived in Dagestan for a time prior to moving to the United States. One of the men even visited Dagestan one year prior to the bombing.

“Radical Islamist groups tied to the war against the Russian state now have much deeper roots, and are far more active, in Dagestan than in Chechnya,” Rajan Menon, senior fellow at the Atlantic Council, wrote in a column for CNN.

Summary Description: The Associate General Counsel is a member of the NCEMC Legal Services Divis...

Introduction: We have an immediate opening for a Spanish-Speaking Associate Attorney (Entry Level). ...