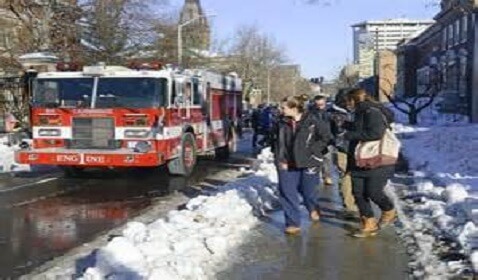 Harvard student, Eldo Kim, has been arrested in connection with the Monday’s bomb threats at the Harvard University that canceled final exams for many students and shut down four university buildings. Kim has admitted that he had sent the false threats to avoid sitting for his final exams.

This is undoubtedly the height of plots ever made by a student to avoid exams.

The email messages read as follows:

Be quick, for they will go off soon”

Panic ensued. The Harvard University Police informed the FBI. The FBI immediately moved in coordination with the Bureau of Alcohol, Tobacco, Firearms, and Explosives; the United States Secret Service; the Harvard University Police Department; the Cambridge Police Department; the Boston Police Department; and the Massachusetts State Police. A huge number of first responders including firefighters of the Cambridge Fire Department rushed to the spot and immediately evacuated four buildings. It took several hours of thorough investigation by bomb technicians and hazmat officers to ultimately conclude that there were no explosive devices placed in the buildings.

Kim tried to cover his tracks by using the anonymous IP service provider TOR, and by using Guerilla Mail to send the false bomb threats. However, he made the dumb mistake of doing everything by using the Harvard University’s Internet network.

When the FBI followed the lead, they found an anonymous Guerilla Mail that was accessed from another anonymous IP that led to TOR. On a closer search, it was found that a student had accessed TOR using Harvard University’s wireless network for a length of time preceding the email threats. On further investigation it was confirmed access had been made from Kim’s room, and when confronted, he confessed.

The affidavit of special agent Thomas Dalton in the case mentions, “Kim stated that he authored the bomb threat e-mails. He further stated that he acted alone. He also stated that he sent the emails to “five or six Harvard University email addresses” that he picked at random from the University’s web page. According to Kim, he was motivated by a desire to avoid the final exam scheduled to be held on December 16, 2013.”