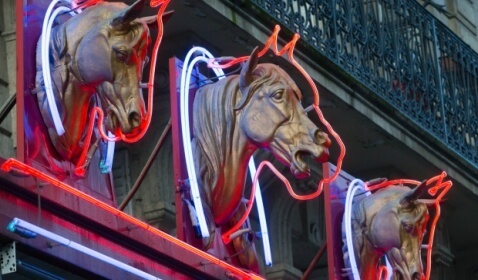 Several meat dealers and at least three vets, have been accused of trading in horse meat illegally. One of these vets is based in Narbonne, which is in southwestern France, and is suspected of being the ringleader of the illicit trade, police sources said, and more than 100 officers were involved in the raids at several Sanofi offices and at various abattoirs, including one in Gerona in northern Spain. French police officers have already made 21 arrests as part of an investigation into the claims that meat from horses got into the food chain. According to Yahoo News, the Company, Sanofi, “said it had sold around 200 horses in the last three years, mostly to veterinary colleges, individuals or to horse” centers. The case follows a Europe-wide health scare that happened earlier this year when horse meat was found in millions of ready meals labelled as containing only beef.

Some of the horses that had been owned by the pharmaceutical giant Sanofi, used in laboratory procedures and medical research, were “sold to abattoirs after their veterinary papers had been falsified, a police source told AFP. The company said it had sold around 200 horses in the last three years, generally to veterinary colleges, individuals or horse centers. A spokesman stated, “The horses are all micro-chipped for traceability and they do not present any danger in the event of human consumption,” and then he also added, “It is specified in their sales certificates that these horses are not to be introduced to the food chain, but that is as a precautionary measure, not because there is any danger.”


Eating horse meat is regarded as taboo in some European countries, notably Britain, but is still widespread in Belgium, France, Spain and Italy. Notably the cast metal horse heads were used in France outside restaurants in the late 19th century to advertise that horse meat was served within. Locals will tell of its tastiness – so please, don’t get squeamish.